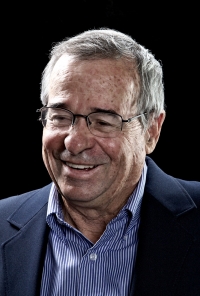 Arieh Warshel was born in 1940 on Kibbutz Sde Nahum during the British Mandate of Palestine.

In the 1970s Warshel did a postdoctoral fellowship at Harvard University in Cambridge, Massachusetts. Then he returned to Israel and the Weizmann Institute. He has worked for a molecular biology laboratory in Cambridge, England, and in 1976 joined the chemistry department as faculty at the University of Southern California near Los Angeles.

Warshel is admired for his research on computational biochemistry and biophysics, and especially for simulating with computers biological functions. He developed what is now referred to as “computational enzymology,” which includes numerical simulations of reactions mechanisms of enzymes. The objective is for such quantitative simulations to lead to qualitative knowledge and discoveries.

Warshel is member to multiple renown scientific organizations including but not limited to the U.S. National Academy of Sciences, Royal Society of Chemistry (fellow), and the Biophysical Society based in Maryland.

In 2013, Warshel won the Nobel Prize in Chemistry with his colleagues Michael Levitt and Martin Karplus, for their development of large complex models that mimic chemical systems.

Co-Founder and CEO of ADDO AI, an artificial intelligence solutions...