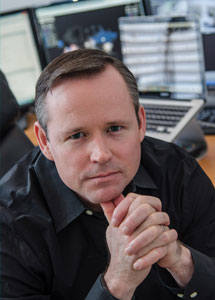 He is best known for his coverage of profit-seeking cybercriminals. His interest grew after a computer worm locked him out of his own computer in 2001.

Brian Krebs worked as a reporter for The Washington Post from 1995 to 2009, authoring more than 1,300 blog posts for the Security Fix blog, as well as hundreds of stories for washingtonpost.com and The Washington Post newspaper, including eight front-page stories in the dead-tree edition and a Post Magazine cover piece on botnet operators.

But you didn’t really want to read my resume, did you? What most people want to know is how I got into computer security, and whether I have a technical background in the field. The short answer is “by accident,” and “no,” respectively. I earned a Bachelor of Arts in International Studies from George Mason University in 1994, and at the time I wasn’t much interested in computers, although I had programmed a bit on an Apple II and spent quite a bit of time visiting online bulletin boards as a kid. It wasn’t until 2001 — when my entire home network was overrun by a Chinese hacking group — that I became intensely interested in computer security. I had been monkeying with a default installation of Red Hat Linux (6.2) on an old Hewlett-Packard system, because for some reason I had it in my head that it would be fun to teach myself how to turn the spare computer into an oversized firewall [ah, the irony]. That is, until the Lion Worm came around and locked me out of my system.

Twice. After that incident, I decided to learn as much as I could about computer and Internet security, and read most everything on the subject that I could get my hands on at the time. It’s an obsession that hasn’t let up. Much of my knowledge about computers and Internet security comes from having cultivated regular and direct access to some of the smartest and most clueful geeks on the planet. The rest I think probably comes from a willingness to take risks, make mistakes, and learn from them.

In 2014, Krebs published a book called Spam Nation: The Inside Story of Organized Cybercrime - from Global Epidemic to Your Front Door, which went on to win a 2015 PROSE Award.

Strategic Management and Marketing expert with specialisation in Information Communication...

Balkanski Professor of Physics and Applied Physics at Harvard University...