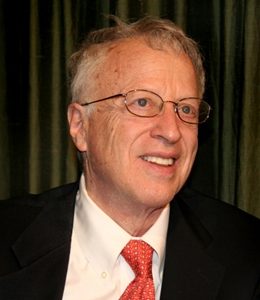 Akerlof was born in New Heaven, Connecticut, United States, on June 17, 1940 to Rosalie and Gosta Akerlof - chemist of the Yale faculty and inventor. Naturally both of Akerlof's sons began there education at Yale University. Younger George Akerlof choose to study economics. In 1962 he received a B.A, after which he studied at Massachusetts Institute of Technology earning a Ph.D. 1966 lucky enough to obtain an assistant professorship at Berkeley he wrote the "Market for 'Lemons'", which is the work for which Akerlof has been cited for the Nobel Prize in 2001 with A. Michael Spence and Joseph Stiglitz.

His research broke with established economic theory in illustrating how markets malfunction when buyers and sellers – as seen in used car markets – operate under different information. "George Akerlof demonstrated how a market where sellers have more information than buyers about product quality can contract into an adverse selection of low-quality products. He also pointed out that informational problems are commonplace and important. Akerlof's pioneering contribution thus showed how asymmetric information of borrowers and lenders may explain skyrocketing borrowing rates on local Third World markets; but it also dealt with the difficulties for the elderly to find individual medical insurance and with labour-market discrimination of minorities" – we read in press released from the Royal Swedish Academy of Sciences.

Not only known and respected as Noble Prize winner he has been senior economist at the President’s Council of Economic Advisers, and past president, vice president and member of the executive committee of the American Economic Association, and member of the Council of the Econometric Society, trustee of the Economists for Peace and Security, and co-director of the Social Interactions, Identity and Well-Being program at Canadian Institute for Advanced Research.

Economist, Author, Professor of Economics and Political Science at the...

Director of Global Indicators and Analysis at the World Bank,...

Christophe Ginisty is an international public relations guru and a...