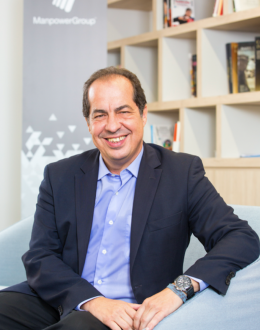 The most relevant Spanish expert in Leadership.
cubeiro@gspeakers.com
SERVICE
STANDARD
PRO
VIP
- OR -
+1 415 800 4260
ABOUT SPEAKER

Juan Carlos Cubeiro is Head of Talent of ManpowerGroup and CEO of Right Management. ManpowerGroup is the world's leading talent solutions company with nearly 14,000 client companies in Spain, which helps generate more than 12 million jobs in 82 countries a year. Right Management, is the ManpowerGroup company specialized in talent management and career solutions with 80% of the Fortune 500 list as customers.

For 33 years, he has headed strategic consulting projects in Leadership, Executive Coaching and Career Management for more than 1,000 companies and is considered the Coach with the largest number of CEOs in Spain. He is also Honorary President of AECOP, the Spanish Coaching Association.

He is also a prolific writer of prologues and hundreds of articles for the main Spanish headlines such as Actualidad Económica, Expansión, Cinco Días, El País or El Economista. Cubeiro is at the forefront of the "Future of Employment" and the pioneer of "Management Storytale" and the concept of  "Talentism". Since August 2007, he writes the daily blog “Hablemos de Talento”  (Let's Talk about Talent)

Cubeiro has been a teaching in Deusto Business School for more than 20 years, and also in more than ten Business Schools and Entrepreneurs Master. Among the many awards he has received are  ‘The Humanist Leader Award’, ‘Leader of Excellence’ (Bogotá, Colombia), ‘The Brain & Heart for the best teacher’, Knight of Guadalupe Spanishness and Honorary Doctor at the  HAC Business & Management of the New York University.

Cinephile, he reads a book a day and spends 40% of the time on “Learnability”.

Balkanski Professor of Physics and Applied Physics at Harvard University...

Socioeconomist, Brand Sociologist, Managing Director and Founder of the Office...