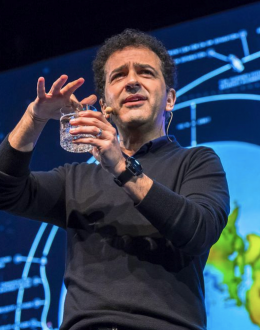 Safi is a former public-company CEO, physicist, award-winning entrepreneur, author of the international bestseller Loonshots, and widely regarded speaker and advisor on innovation and strategy.

Loonshots: How to Nurture the Crazy Ideas that Win Wars, Cure Diseases, and Transform Industries - which combines physics, business, and history - has been translated into 18 languages and was the #1 most recommended book of the year in Bloomberg’s annual survey of CEOs and entrepreneurs. Loonshots was selected as a best business book of the year by Amazon, Bloomberg, Financial Times, Forbes, Inc., Newsweek, Strategy + Business, Tech Crunch, the Washington Post, and many others; and has been recommended by Bill Gates, Daniel Kahneman, Malcolm Gladwell, Tim Ferriss, Gen. (ret) Stanley McChrystal, and more.

Testimonials from his keynotes at Fortune 500 companies include: "One of the best keynote speeches I have ever heard"; "The positive feedback we have received has been overwhelming"; "The best content, best delivered of all the sessions - the only one where totally immersed engagement was the default rather than something that took effort."

Co-Founder and Board Member at Unity Technologies

Climate strategist, researcher, professor and entrepreneur with a focus on...

Bakala Professor of Strategy
Tuck School of Business at Dartmouth...

An icon of the Mexican coffee industry, Founder and managing...